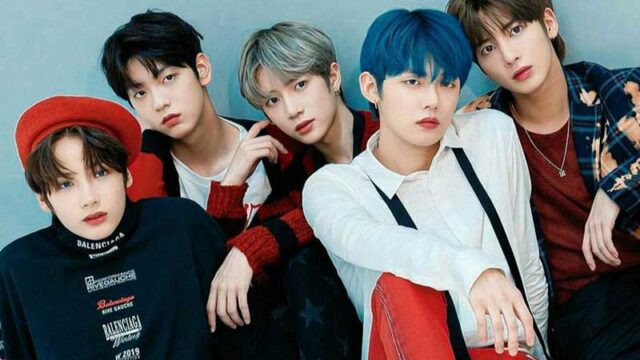 TOMORROW X TOGETHER (Tomorrow by Together, abbreviated TXT) is becoming more and more visible on Japanese music programs, and its popularity is assured.

In this issue, we summarize who are the most popular TXT members in the topic.

TXT members are ranked by popularity!

We have taken the liberty of conducting our own survey on the popularity order of TXT, which is of interest to everyone.
(Thank you very much for your cooperation!)

Number of votes in parentheses ()

A rare result, with first through fourth place being so close!

When a popularity contest is held, there is usually a clear difference between first place and the rest, but TXT is popular with everyone.

Hyuninkai-kun opened the gap, but I think he was off by the "choose only one person" requirement.
If it had been multiple choice, it might have turned out differently.

Why are TXT members so popular?

Along with the popularity vote, we also asked them why they liked the members they chose.
Here are some of the attractive points of the five TXT members and some of the comments from those who cooperated.

You must read the reasons why we recommend everyone's members, and you'll find yourself saying, "I know what you mean!

The winner of the TXT member popularity contest is Bom Kyu!
This cute and cool face is 100% Japanese girls' favorite, isn't it? Right? Right? LOL.

He is the mood maker of TXT and a bright and beloved character.
In performance, his captivating bass voice brings an indispensable accent to TXT.

His face is called art, the miracle of mankind, Mr. Taehyung!
Just looking at the images may or may not have a healing effect...

This transparency is truly a miracle of humanity,...
No matter which angle or which expression is cut out, there is only beauty.

Throat to source singing, rich vocabulary and TXT intelligence.
And he is also fluent in Japanese. How can he be so perfect? I would like to say, "Perfect boy.
That's Kang Tae Hyun!

The high level of his ability, also known as a legendary practitioner, and his
And Yong Joon-kun, who has an aura of "not just a thing" and infinite charm.

It's only because of Yong Joon that he can match even the most eccentric hair color!

Everyone's "Why I love Yong Joon"

The answer to the reason for Yong Joon-kun's guess is...

It was the hottest.

Although it did not win first place in the number of votes received, it was seen as the No. 1 in terms of fan density.

Suh-bin, with his sticky cheeks, is an unaware natural.
She's calm, kind, and loves MOA! He is an inclusive leader.

Such fluffy air and humanity of Subin-kun are loved by the audience.

Everyone's "Why I love Subin"

TXT's anyway, bright Hyuninkai-kun!
He is loved by the members for his outstanding youngest son.

I love the gap between a visual as beautiful as a real prince existing in the three-dimensional world, but with a unique and flamboyant laugh.

What is the popularity order of TXT members overseas?

The above popularity order of TXT members was answered mainly by Japanese.
However, TXT is a global boy group.

You may also be interested in the order of popularity overseas.

So, here we are.Ranker.Here are the results of an overseas ranking site called

The charismatic Mr. Yong Joon, with his overwhelming aura and skills, came in first place!

I think this makes sense, considering that the visuals preferred in Japan and other countries are different, and it is also said that skills are more important.

Summary of TXT members in order of popularity

One last time.
Thank you so much for your cooperationーーー ！！！！

May these five great people be loved even more.
And I wish all of you who love these 5 great people to spend more and more shining days ^^.