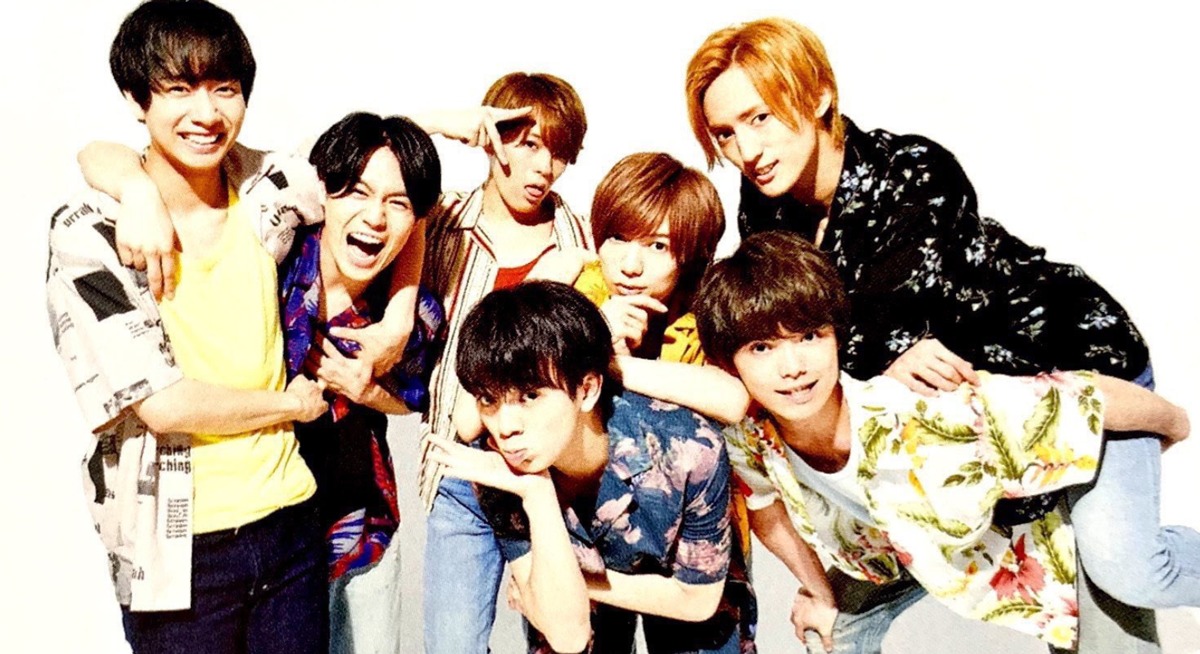 What does it mean to have the exact opposite elements of cool x cute?
In this article, I will summarize basic information about Travis Japan, such as the group's appeal, member profiles, member colors, height, age, and more!

What kind of group is Travis Japan?

Travis Japan is a seven-member unit of Johnny's Jr.
Abbreviated as Toraja.

Although the unit was formed in 2012, it has gone through several member changes to reach its current seven members in 2017.

Even before their debut, this popular group had solo gigs and media appearances!

Their biggest attraction and the group's weapon of choice is
The quality of the dance performance!

That's no surprise, since Travis Japan was formed by members specially selected by world-renowned choreographer Travis Payne.
*The current members have been in place since 2017 after being replaced from the initial members.

Travis Japan's crisp, perfectly synchronized dance moves by the seven members are worth seeing more than once.
Travis Japan is said to have one of the highest dance levels among the Johnny's Jr.

I think the strength and charm of Travis Japan is that their dancing is "THE" dancing. It is a fundamental feeling like "music is wonderful". When I see them dance, regardless of genre, I think, "Dancing is cool and amazing.

I knew that with all these dances, the lessons wouldn't be too hard...
But I think it's really cool and awesome of Travis Japan to overcome all that and give their fans a great performance! pic.twitter.com/zwacaou89L

And the members are adorable!

The members of Travis Japan show such cool dance moves, but when they are not performing, they are surprisingly loose and cute, so much so that they are called "Travis Kindergarten Japan" by their fans.
Travis Japan is a group where everyone is all blur and blur all the time.

The difference between the expressions they show in dance and talk, and the gap between the two, swamps them beautifully.
The members are friendly with each other, but there is a strong bond among them to achieve the same goal, which enhances the group's attractiveness.

I don't know, I've never seen other groups before, so I don't know, but I've seen more of them. Are they doing it right? (Laughs)

YouTube is a handsome place where you can see how cute and friendly everyone is every week, and it really overflows with love.

That's a swamp!!!!
We continue to be swamped by Travis Japan. pic.twitter.com/1YnBUries7

Now, let's profile these Travis Japan members one by one!
There are three "Kaito-kuns" in Travis Japan, which is amazing, to say the least.
I'd like to check what you call it ^^^.

Kaito Miyachika is the center of Travis Japan.
Not only does Kaito Miyachika have a good face, but he has been dancing since he was a child, and his beautiful, flowing dance attracts the attention of his fans.

Kaito Miyachika is not so tall at 166.5cm, but he still has the dance skills to stand on his own in the center.
And he's got a nice voice you'll want to listen to over and over again!

Kaito Miyachika, who is dancing and singing in the center of the stage, will be in a drama a few hours later today as a commoner being hunted. (Swamp of Swing). pic.twitter.com/TNynqtqr88

Nakamura Kaito is first of all visually pleasing, with a small face and good style...!
His long limbs and snappy dance moves are super cool!

On the other hand, there is an indoor side that loves to play games, and a caring side that is an idea man, watches the members closely, and always wants the fans to have fun.
The more you know about Nakamura Kaito, the deeper he is.

Shimekake" is written in Japanese and reads "Shimekake. That's an unusual surname!

Tatsuya Shichigosangake is a cute and handsome Japanese idol.
And he knows how to make himself appealing.
Shichigosangake Tatsuya's one-shot gag "Hushi-teron-teron" is also moe. It is cute.

He is a sociable character who is loved by people outside the Travis Japan group because he talks to seniors on his own initiative.

Tatsuya Shimekake, who sometimes comes up with choreography for Travis Japan.
Tatsuya Shimekake is a petite 166cm tall, but his dancing ability does not appear so.
They are conscious of dancing each movement carefully because of their small size.

Ryoeru Kawashima is the oldest member of Travis Japan.
She is the firm mother of the group and organizes the kindergarten-aged members.

Before joining the Johnny's Office, Kawashima played the role of Young Simba in the Shiki Theatre Company's "The Lion King" and was a member of the kids' dance unit "Wonder☆5.

Although his face and name often lead people to believe that he is half-Japanese, he is purely Japanese.
She has heard that her grandfather on her mother's side was apparently half Dutch and half Japanese.

The name Noel came from a picture book that Ryoeru Kawashima's mother read as a child, and she wanted to name him Noel someday.

The hair color is darker these days, but the blonde hair already accentuates the uniquely Japanese face.

However, it is the fruit of his hard work, and his "daily devotion" is a source of encouragement to his fans.
Kawashima's efforts extend to his studies as well, and he is an intellectual idol who graduated from Aoyama Gakuin University and has obtained a national license as a licensed real estate agent.

Kanya Yoshizawa started dancing after he joined Johnny's, but he has worked hard and is now a choreographer for Travis Japan.
Perhaps it is because of his relatively stocky physique, but Kanya Yoshizawa's signature is his unshakable dance.

Kanya Yoshizawa is not the type of person who stands out in a group, but he is an indispensable supportive presence who looks after those around him well.rear arcIt is said.

On the other hand, Genta Matsuda is called a "comic ghost.
As his name suggests, he is a friendly and lovable younger brother character who is adored by all.

And it is indispensable to talk about Genta Matsuda-kun.
Genta Matsuda and Kaito Matsukura are considered to be the two strongest symmetrical duo and have been strengthening their bond as a perfectly matched duo long before they joined Travis Japan.

Here is another precious symmetry 😭💓

Genta Matsuda and Kaito Matsukura joined Travis Japan in 2017, nominated by the members at the same time when the number of Travis Japan members was increased.

The words that describe the Matsumatsu duo, who love each other and are also rivals and enhance each other's skills, are no longer used.Emo."I don't see why not!

Kaito Matsukura has fair skin and a beautiful smile.
Yes, his cuteness is the element that gets everyone hooked.

Look at the smile on Kaito Matsukura's face. Words are no longer necessary, right?

And yet, Kaito Matsukura is straightforward and acts with conviction, always giving his all.
He is also appreciated for his purity and hard work ethic.
Many girls were struck by the gap between their sharp and sharp performance and their cute smiles during the talk.

The members of Travis Japan are listed in order of height.
Refer to the July 2019 Jr. directory.

I heard that according to some data, Kaito Matsukura's height is taller than 162cm...

As Kaito Matsukura himself confides on his Youtube channel, he was growing taller at one point, 162 cm to be exact.

Travis Japan members sorted by age.
The ages below are always updated with the latest!

What is the popularity order of Travis Japan (traja)?

We have ranked the number of posts with hashtags on Instagram in order of popularity.
I would like to refer to this as a theory.

Travis Japan is also characterized by the fact that many of the group members like all the members of the group, which makes it a boxy group.

Kaito Nakamura, Tatsuya Shichigokake, and Kaito Miyachika have been the three most popular, but over the past few years, Genta Matsuda's popularity seems to have increased.

I mentioned earlier that Travis Japan's appeal is its dance and the sense of looseness when they are not dancing, but the gap between these two aspects is amazing, which, when put together, is its greatest appeal.

Each member has a wonderful individuality, and their hard work and gumshoeing is said to give them a spark that other idol groups do not have.

Travis Japan is a talented idol group that still has a lot of growth potential.
Can't wait to see what kind of performance they'll bring to us in the future!