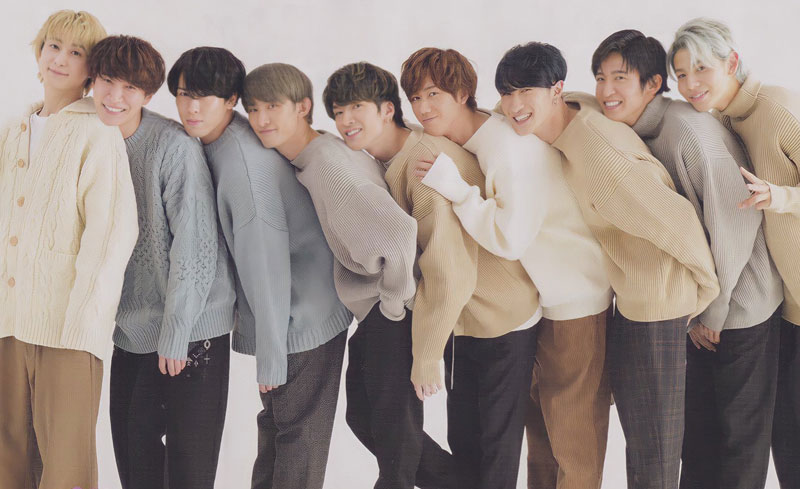 Snow Man, whose members get along well with each other, has a duo within the group.

They all get along well with each other, but the duo who get along particularly well or have good chemistry is so remarkable that there are even duo guesses.

In this issue, we bring you a list of all Snow Man's duos, their best friend episodes, and a "Complete Snow Man Duo" summarizing their popularity in order of popularity!

There are a total of 36 combinations of the 9 Snow Man duos!

Basically, two letters are taken from each name to form the duo's name, but special episodes give the duo unique duo names.

Among all the Snow Man duos, we have selected nine pairs that we consider to be the best duos, based on our own prejudice.

Abefuka," a combination of Ryohei Abe and Tatsuya Fukasawa

These two are the same admission duo.
Abe and Fukazawa joined Johnny's in August 2004.
Since then, he has been active for 15 years as Johnny's Jr.

It is very rare for Japanese to debut in the same group as their peers.
We are all colleagues who have come from humble beginnings to achieve the debut we have longed for, aren't we?

Fukasawa is older than Abe, but Abe is always quick to take the joke out of Fukasawa's joke, and the two have an unreserved relationship.

They have spent a lot of time together, so they know each other well and trust each other.

The pleasant humor of "Maybe" sung by Abefuka at Takizawa Kabuki is also a must-listen!

This may be surprising since these two rarely flirt openly, but they are a very close duo.

The quiet Mr. Tachi and the energetic Mr. Sakamoto are complete opposites, but they share a similar work ethic and passion for their jobs, and they get along so well that they go out to eat together and talk on the phone for long hours.

Even for two such forgiving people, there used to be a time when they were distant from each other and in a glacial period.

Takizawa-kun was the one who broke the ice, and when he found a deep connection between the two of them, he suggested that they talk.

Teru Iwamoto and Daisuke Sakuma are the duo "Iwasaku".

We even say to ourselves these days, "We are Nicoichi (we are one)!
For this reason, they are also called the Nicoichi duo or Nicoichi Iwasaku.

These two are so close!

Are you guys dating? They touch each other to the extent that they are //.

Iwamoto-kun, who makes a good joke to Sakuma-kun's joke, and
Iwamoto, a seemingly cool but lonely boy, and Sakuma, a cheerful guy, are the two main characters.
It is a good combination.

Iwamoto-kun, who is a firm man, is very relaxed when he is with Sakuma-kun, and this relationship is very precious.

The two are good dancers and played rock-paper-scissors (high-five?) even in the dance video of "Grandeur," which is said to be the most difficult dance in Snow Man's history. The two are so confident that they can afford to be.

Daisuke Sakuma and Ryohei Abe are the duo "Abesaku".

The duo is said to have "zero in common."
The reason for this is that we are the exact opposite types, but we are super~friends!

Abe is the smart and brilliant idol, and Sakuma is the sensible and playful boy.
We are complete opposites, but we are so close that we travel to Hawaii together.

These two have a history of compensating each other for what they lack.

It is hard to imagine now, but it was Abe who first contacted Sakuma, who was shy when he joined Johnny's.
From there, Sakuma became familiar with the world of Japanese people and was able to talk to many different people.

And Abe, on the contrary, says that Sakuma's positivity influenced him to stay positive even when he was down.

They are said to have zero in common, but they are similar in that they are always smiling and mild-mannered ^^.

The "bruise and police skit" to arrest Abe-chan is another symbolic exchange of abesaku.

Don't tell me you haven't heard of this miraculous duo by now!
These two were born in the same hospital, grew up in the same hometown, attended the same kindergarten, met again by fate in Johnny's, and debuted in the same group.

Yurigumi is so emo that it is expected to be made into a movie, which is detailed in a separate article ↓.

Shota Watanabe is shy and Ryota Miyadate is cool, so they don't show their affection overtly, but when they do, even a little bit, Yurigumi members all over the country go crazy.
This is Justice!

These two men are a "friendship of men".
They are two people who support each other, who understand each other, though they rarely say so in words.

Iwamoto-kun, who has the image of a dependable big brother, is also cute in front of Miyadate-kun, giving him a spoiled little brotherly impression.

The two have been in Johnny's business for so long that they can "talk from the root" of their relationship, and their love for each other shines through in their performance!
It's the Takizawa Kabuki "sword thrower!"

Catching a sword thrown at this distance is a great feat that requires a relationship of trust.

There is a back story that Abe, the brain behind Snow Man, gave advice on the angle and speed that would work well.

The Iwamoto Brothers, a duo of Teru Iwamoto and Koji Mukai

This relationship started when Iwamoto-kun resembled Mukai Koji-kun's older brother and started calling him "Teru-nii".
Recently, people are talking about how they both look like real siblings.

The episode with Teru Iwamoto, who gently supports the nervous Koji Mukai, is another tear-jerker.

When Snow Man debuted, Iwamoto-kun held the hand of Koji Mukai, who was shaking with nervousness, to calm him down.

In the debut song "D.D.," the first thing they do is line up in a row, and Iwamoto-kun and Koji-kun, who are standing in front of and behind me, hold hands in a routine.

It's so exciting to see such a great scene behind the big stage, isn't it?

Mekoji are the two guys in "Adventure Boys".
The strength of their bond on Escape Island brought viewers to tears.

I cry every time I recall the scene where Meguro, who succeeded in escaping from the desert island first, is the first to worry about Mukai.

Mukai-kun gets jealous when Meguro-kun gets along with other members.

Memelau is so close to Meguro-kun that his real brother is jealous.

Raoul, who was selected for the talented group Snow Man when he was still in his teens, was at a loss when he first joined the group.

It was Meguro Ren-kun, a manly man, who supported us.

There is an episode in which Raoul was so full of himself that he cried during a Takizawa Kabuki performance, and we comforted him and walked him to the station on his way home.

Meguro must have had a lot of trouble as a member who joined Snow Man later, but he was able to care for others.
The bowl is too big.

Ranking the top 5 most popular of all combinations!

In this case, we ranked them by the number of Instagram posts.

Three MEME 00s ranked high.
If you rank them by number, you get...

There are too many handsome men in Meguro lotus.