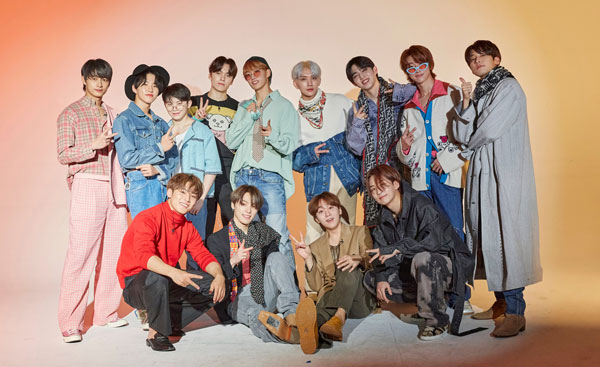 SEVENTEEN is a large boy group with 13 members whose individuality shines through.

They are a K-pop idol group that has exploded in popularity in their home country of Korea, Japan, and around the world!

You may be wondering who is the most popular member of SEVENTEEN, or Sevchi for short?
Research & summarize the popularity order of SEVENTEEN members and reasons for their popularity.

Sevchi members are ranked by popularity!

No major bias, just a few close ties!
Sevchi seems to be popular with all the members.

Let's take a look at the reasons for the popularity of each Sevchi member!

Jun is the owner of overwhelming visuals.
He's so handsome in every scene, he's no longer out of this world...!

Jun is such a wonder kid, but his personality is "THE wonder kid"!
Fans call him "Munjunfi in Wonderland" lol.

They shouted something suddenly, or walked with footsteps echoing in the dormitory for no reason...
The more I look for it, the more I find the strangest episodes. lol!

Cool Wonu, with his long, crooked eyes!
Many people say they like these eyes.

Wonu's low-pitched rapping is impressive, but he is actually a very good singer.
She seems to love singing and often sings at VLIVE and other events!

Wonu's personality is laid-back and self-paced.
He is often in a daze, but sometimes surprises his fans with his unpredictable movements.

Wonu has a strong image of being quiet and cool, but if you observe him closely, you can see his mischievous side, which is another charm of Wonu!

Everyone's "Why I Love Wonu"

Jung-han-kun has a visual that looks like it came straight out of a girl's comic book.
Jung-han has the appearance of an angel, but his personality is the most mischievous of all the members.

Because of his free-spirited personality, fans sometimes call him "Gian" or "Gota" lol!

Although Jong-han is such a caring person, he is also like a mother to the members, listening to their problems.
The usual pranks are also forgiven by the members because of their love for each other.

Everyone's "Why I love John Han."

Mr. Dogyeom has a gentle and clear singing voice.
She always has a smile on her face and makes both members and fans smile!

Dogyom-kun has such a gentle personality that he is said to be "the next gentlest after God.
Because of his overly kind nature, he practiced hard to get angry when he appeared in the musical "Excalibur" in order to perform a furious performance.

Dugyeom is usually cheerful and enlivens the atmosphere of the place, but in fact he has a sentimental and weepy side.
During the recording of one of the songs, I cried because I couldn't get the best out of my practice.

At the time of his debut, Diate was a cute character, but now he gives a strong impression of coolness.
I love the cute little Diate, but I also love the charismatic aura that he exudes!

Deyate-kun is quite a fashionista, and his eyes sparkled as he selected clothes for the project to coordinate the members.

She has a serious and diligent personality with a high level of professionalism, cares about her health more than anyone else, and reads to improve her powers of expression!

Joshua, with his big eyes and small face.

Joshua is a self-proclaimed "gentleman" and is usually gentle and polite.
However, he sometimes shows a naughty side, and is called "Dark Ozis" because of the gap between him and his usual self!

In addition to Dark Ojisu, he is also called "Grandpa Su" because of his slow and grandfatherly movements.

He is not the type to lead the pranks, but when he does, he goes all out and is everyone's big brother!

Everyone's "Why I Love Joshua"

The love for the members is strong, and you can tell at various times that they truly care about each and every one of them.
He's caring, kind, and truly the father figure of the group!

On stage, Escups has an aura of charisma, but in fact, he has a shy side.
She's as shy as anyone when it comes to charm, but she's just as cute when she's embarrassed!

Hoshi is a paph leader and a genius choreographer.

SEVENTEEN's original and commanding performance was only possible because of Hoshi!
He is also multi-talented, participating in the production of live performances.

Although Hoshi is a talented young man, he has a talkative and energetic personality.
He calls himself a "tiger," but he's also adorable in the way he never admits it to the members. lol!

Everyone's "Why I Love Hoshi"

Wuji is involved in writing the lyrics for most of SEVENTEEN's songs.
As a composer and vocalist, he's the mainstay behind Sevchi!

Uji is nicknamed "Baby" because of his baby face and short stature, but he has a very masculine personality.

I rarely take the initiative in skinship, and I gloriously avoid skinship attacks from the members.

He is not cold, but you can feel his love for the members from every word he says and does!

Everyone's "Why I Love Uzi"

With his cheerful personality and excellent storytelling skills, Sungkwan is also active in variety shows.
With his penetrating voice, he is the main vocalist, leading Sevchi together with Dugyeom!

He often sings for us at VLIVE and other events, but he's really good at just singing along...!
Sungkwan is so cool when he sings!

He often plays the role of MC, and Sungkwan is a solid person who is friendly and attentive.
He is a beloved character, adored not only by the group but also by his seniors!

Mingyu has masculine visuals and an overwhelming style.
Min-kyu is a tall, handsome man who is also good at housework and is truly a "perfect human being"!

Although his appearance may make you think he has a cool personality, Mingyu-kun is friendly and has the personality of a large dog.
The gap between her appearance and that of the other members is sure to make your heart flutter!

Dino, the youngest member of SEVENTEEN.
He's growing up strong, being squirmed around by his 12 older brothers, lol!

Although Dino is the youngest in terms of age, he is a firm believer who can clearly express his opinions.
It seems that the older brother members often get angry with Dino-kun lol.

Dino belongs to a performance team, but he is an all-rounder who can rap, sing, and do everything else.
Of course, her dance skills are high, and her dynamic and dainty dance moves are irresistible to all who see them!

Mr. Vernon looks like a Hollywood star.
Half French-American and half Korean, he is called "Little DiCaprio" because of his resemblance to a young Leonardo DiCaprio!

Vernon-kun's personality is fast-paced and mysterious, which is different from Jun-kun's.
They are usually so vague that a member spills the beans that they have never listened to me at one time.

His core strength to maintain a stance of "I am who I am" without being influenced by those around him and his pure character are also part of his charm!

What is the popularity order of SEVENTEEN members overseas?

The above popularity rankings for Sevchi members were conducted in Japan.
However, Sevchi is a globally active boy group.

You may also be interested in the order of popularity overseas.

So, here we are.Ranker.Here are the results of an international ranking site called (as of 2021/02/20)

Overall, the results were quite different, but Wonu-kun and Joshua-kun are very popular overseas too!

One last time.
Thank you so much for your cooperationーーー ！！！！

May the 13 members of SEVENTEEN, who are such great people, be loved even more.
And I wish everyone who loves such a great SEVENTEEN to spend more and more shining days ^^.

We hope you will understand that the order of popularity is based solely on the results of our survey.

*This survey has nothing to do with the official
*We do not obtain personal information from surveys.