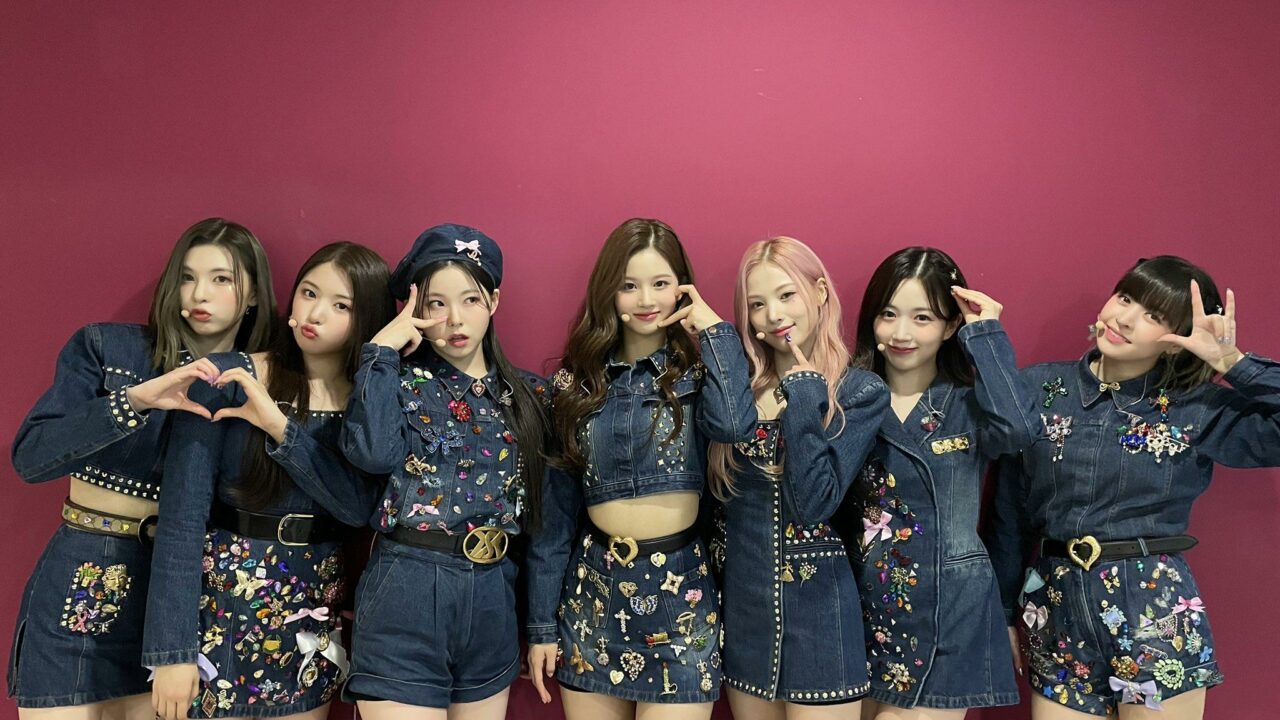 これまで、Wonder Girls、miss A、TWICE、そしてITZYを輩出し、 JYP Entertainment, known as a "prestigious girl groupfromLaunched for the first time in nearly three yearsNMIXX, a seven-member girl groupThe following is a list of the most common problems with the

What kind of group is NMIXX, JYP Entertainment's promising group that has produced groups with clear and innovative concepts and solid abilities?

We will take the time to introduce you... ♪

NMIXX (Enmix), from JYP Entertainment, is aSeven-member girl group debuts after a three-year absenceIt is.

In July 2021, the company will open an SNS account as "JYPn," and in July the same year, it will hold a 10-day pre-order for a limited edition "blind package" of its debut album.Pre-orders reached 60,000 in 10 days, even before the members were announced.Oh, my God!

This result shows the high expectations for JYP as an agency and a new group!

After that, from August to December, we released cover videos of each member in turn, and every time we did so, people talked about "New member revealed! and each time it became a hot topic of conversation.

What is the origin of NMIXX (Enmix)? How do you read it?

The group name "NMIXX" is a coined word combining the letter "N", meaning "now", "new", "next" or the unknown number "n", and "MIX", symbolizing "combination" or "diversity".The best combination to take charge of a new era."This means.

NMIXX" is written "엔믹스" in Korean, which is "NMIXX" in Japanese, so "Enmix" is the Korean reading.

Announced on the day of its debut, the official fan club name is a coined word combining "N" and "ANSWER," which means "correct answer" in English.NSWERIt seems natural to read "NMIXX" as "Enmix" since it is

About the members of NMIXX, who are highly anticipated and highly sought after.by priority of ageWe will introduce you to the following

Lily, who has an Australian father and Korean mother, is the only member of theBorn in Australia with overseas citizenshipThe following is a list of the most common problems with the

Lily, who is from Australia, has lived in her mother's home country of South Korea for a year or two since 2010, when she was 8 years old at the time, due to a massive bushfire in Australia.

At that time, she appeared in an English language education program for children and participated in a child modeling competition, and even after returning to Australia, she continued her career as a child model!

He signed with JYP Entertainment that year and began his trainee life in Korea, appearing in "K-POP STAR Season 6" in April 2017 and also in one episode of "Stray Kids" in October 2017.

With such a background, Lily is the oldest NMIXX member and has been a trainee for 7 years along with member Jin-hee...!

Her cheerful smile and outstanding singing voice are so appealing that you don't feel any of these hardships.Vocalist representing the fourth generation of girl groups."It is also said that â

She also showcases her excellent vocals in her debut song "O.O", a type of vocal that has not been seen in any previous JYP girl group member, so don't miss out!

Despite her soft visuals and clean vocals, Hae-won's appeal lies in her strength.

They sometimes brush their teeth more than 30 times a day because "brushing your teeth warms your throat...!"

Was it worth it?Members who are also known for their stable performanceIt is.

The Korean version of his stage name "Seolryun" is "설윤", which is taken from the first two letters of his real name "설윤아 (Seol Yuna)".

Sorjun, whose childhood dream was to become a dentist, was also the school president during his elementary school days and was a model student with excellent grades.

The second of the 2004-born trio is Gini, who joined the company the same year as the oldest, Lily, and spent seven years in practice.

When I was in the fourth or fifth grade, I attended a dance school because a friend of mine was in dance school, and I auditioned for an internalJoined JYP Entertainment in 2015 when he was 11 years old at the timeI did.

Jinni hails from Busan, Korea.Lived in a dormitory with TWICE's overseas members Momo, Sana, Mina, and Tsuwi, as well as ITZY's YejiIt is also known for its

Yeji of ITZY was especially happy to hear Jin-hee of Busan accent say, "Onni~, please play with me," which was so cute that his Busan accent was affected by it.

Even now, please pay attention to Jin-hee's charming tone of voice with his Busan accent!

NMIXX is a new style of NMIXX, which boasts that "all members are all-rounders" and does not have a so-called "main" member, but has three positions: vocal, rap, and dance.One of the all-roundersJinni, which is a

She also sang the introductory part of her debut song, "O.O.," with pink hair, and made a particularly strong impression with her "overwhelmingly beautiful" visuals and attractive voice.

The last of the 2004-born trio wasThe only one of the members to join JYP Entertainment as a result of a scout.The bay that did.

He is also the tallest member of NMIXX, being the only one over 170 cm.

With her medium bob hairstyle and cool expression, she has a neutral, girl-crush impression that reminds us of Ryujin of ITZY, who is also a senior member of our office. Her long arms and legs, flexible curves, and supple dancing style are similar to that of Chae-ryong of ITZY.

The second sister team from the bottom among the members of NMIXX, Ji Woo is an all-rounder among all-rounders.One of the members leading the dance with Gini KyujinIt is.

In particular, the small size of NMIXX's dancers, but their powerful and dynamic dance moves with both precision and sharpness, are very attractive.Ace presence that capitalizes on the intensity of the performance.It is.

Ji-woo is an older sister and roommate for Gyu-jin, the youngest of the members, but Gyu-jin sometimes describes her as "more childish than me" because of her extreme expressions of charm (laugh).

Although he is the youngest, leader Hae-won says that he is "the most professional, responsible, and solid person among the members.Manneh (youngest son) of NMIXXThe following is a list of the most common problems with the

As you can see from her cute yet crisp face like a kitten, she has all the cuteness of the youngest child, but she also demonstrates her "professionalism and sense of responsibility" as the cornerstone of her performance along with Jin-hee and Ji-woo♪.

What is SQU4D, the newly established fourth artist headquarters for NMIXX (Enmix)!

JYP's headquarters system, which was introduced after TWICE's debut, has become a hot topic among fans, and fans are well aware of what headquarters their guess group is organized in.

The current JYP headquarters organization is as follows

J.Y. Park, whose recognition among the general public in Japan through the NIZI project has been outstanding, was also a member of this group, but J.Y. Park has now moved to the third headquarters, and the second headquarters seems to be an ITZY-intensive organization.

SQU4D."well"Squad."which means"SQUAD".The word comes from the Hangul language, from the"스쿼드".The reading is also written asSquad."It seems to be the case.

Such is the fourth headquarters, SQU4D.Lee Ji-young, the first female director of JYP EntertainmentThe cast includes 2PM's Nickon, DAY6's Young K, GOT7's Mark, TWICE's Jungyeon, Sana, Jihyo, Tsuwi, Stray Kids' Hyunjin, Felix, and many more... JYP's leading artists have been cast and trained by the company. He has trainedFormed by an elite staff with a proven track recordThe first time the company was founded, it was in the process of being reorganized into a new company.

February 22, 2022.NMIXX debuted with the single "AD MARE."Title song "O.O.music video for the song, which was much talked about for its innovative song structure.

The title of their debut song, "O.O.," a figurative representation of the exclamation "Oh!" that represents wide-open eyes in surprise, begins with a strong trap beat intro, mixing and matching baile funki and teenage pop-rock."Three parts."This is an amazing composition.

The tricky three-part structure makes you want to watch the video two or three times without realizing what's happening on the first viewing, and by the time you've watched it three times, you'll be hooked and addicted to "O.O."! Please take a look at this fascinating music video.

And watching the music video makes me even more curious.A group dance of seven dancers with impressive choreographyOh, my God!

who also belongs to JYP Entertainment.Various choreographies that seem to incorporate the charms of the senior group.is the unique charm of NMIXX!

As the first seven-member group in the history of JYP girl groups, NMIXX's performances showcase the appeal of a cross between the nine-member TWICE and five-member ITZY, both senior girl groups.

In addition, the debut single "AD MAREIncluded in "Divination (TANK)".was also performed on music shows as a follow-up song!

This is a song that gives you a different perspective on the charms of NMIXX from "O.O.," so be sure to check this one out as well.

It was released on the birthdays of Hae-won, the leader of the group, who celebrated his birthday right after his debut, as well as Ji-woo and Jin-hee, who celebrated their birthdays in April in succession.Too cute parcel collage photoAlso of note!

It has become a tradition for many groups to release a yosegaki image on a member's birthday, but NMIXX's yosegaki is different!

Collage of photos of birthday members chosen by the membersAnd it's a short but colorful and pretty picture of a mishmash!

And at the end of the birthday, the birthday member gives back to the other members.Collage of member photos with messages attached to the images.Until...!

You can also see photos of other members' yosegaki on the official SNS.â

We can look forward to seeing the photos of the members who will celebrate their birthdays in the near future.

A "prestigious girl group" that has produced Wonder Girls, miss A, TWICE, and even ITZY. Debut from JYP Entertainment with high expectationsNMIXX, which has been

In his debut song "O.O.Innovative music far beyond imaginationand as NMIXX, which is different from the senior group.New Style of PerformanceThey were fascinated by the

The two songs "O.O" and "Occupation (TANK)" are enough to establish the "NMIXX" genre, but NMIXX has only just debuted!