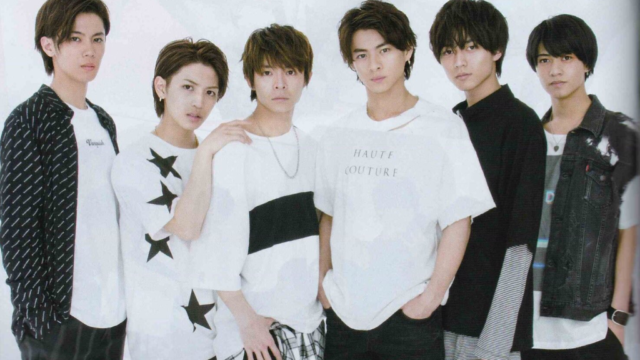 The idol group King & Prince (KINPRISE) is expanding its activities not only as a group but also as individuals, in dramas and movies.

I hope they shine regardless of their rank! At the same time, I can't help but wonder about the popularity order of these Kimpli members.

The music video for "Lovin' you" has now been released, the first time for King & Prince that the song is not performed.
The content of the program is to take fans out on what each member considers to be an ideal date.

The YouTube version of the video is vertical, with smart phones in mind; the version on the A's limited edition DVD is horizontal. This DVD also includes a solo version of the date.

Questionnaire conducted by Weekly Women's PRIME
"Favorite and Disliked Journeys 2018."
The results are published by extracting only the members of King & Prince from the

And the popularity rankings of the Kimpli members during the "Mr. King vs. Mr. Prince" era!

We also have data on the popularity ranking of King & Prince, also by Weekly Women's PRIME, announced on 8/29/2015.

This is an exclusive survey by Kimpuri, asking "Mr. King vs. Mr. Prince's favorite member".

And here it is!

Compare these 2015 results to the 2018 popularity ranks for Kimpli members.
I see that Kaito Takahashi moved up from 6th to 4th place.

Takahashi Kaito joined Johnny's in 2013, the shortest period of time for a member of Kimpuri, so he probably did not have many fans at that time.

Guess the popularity rank of the Kimpli members based on SNS.

Since a survey based on questionnaires may be limited in scope, we would like to see the real-time popularity rankings based on the number of posts on social networking sites, where anyone can participate!

Twitter is also used to promote shows and movies, so it's not always just fans tweeting.
The number of tweets may also give an indication of popularity and attention, so I will try to rank them.

Why were there so many tweets about Yuta Kishi?is probably due to the many tweets of Happy Birthday to Yuta Kishi on September 29.

If the other Kimpli members also have a period that includes their birthdays, the ranking will likely change considerably.

So who had the most tweets about Yuta Jinguji?
We believe this is due to the spread of this tweet.

RT @CWlerlI4RsSvTVi: This happened on the bullet train. I hope there will be no more victims like my sister in the future. Also thank you Jinguji Yuta and those who seem to be staff members. I know you won't get it, but I appreciate it. # Kimpli # Spread the word https://wintomorrow.at.webry.info/201809/article_14.html

It is the episode where Yuta Jinguji and his staff apologized to his sister who was pushed down by a Kimpli fan on the bullet train.

It shows what a gentleman Yuta Jinguji is!

Ranking of popularity of Kimpli members based on Instagram

Then, next!
Let's see how the Kimpli members rank in popularity by Instagram hashtag count!

Insta is the same as twitter, but it's not just your full name.
I'm sure the number of posts will change if you include other names, etc.
This time we limited the number of submissions to full names only.

Kaito Takahashi and Genki Iwahashi were close behind!

And this ranking is...
It matches the popularity ranking of the Kimpli members in Weekly Women's PRIME, which I wrote about in the very beginning!

The unshakable leader is Shiyou Hirano, followed by Ren Nagase, and the stable leader is Yuta Kishi.
They were followed by Takahashi Kaito, Iwahashi Genki, and Jinguji Yuta.
It seems to be the popularity ranking of the Kimpli members.

As King & Prince continues to expand their activities, we will continue to work with them to create a new style of music.
It will be a bit of fun to see how the popularity rankings will change.