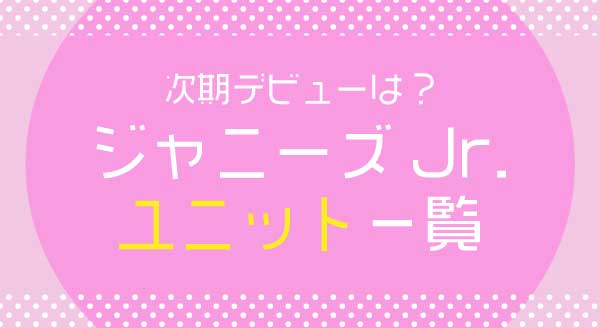 Since the simultaneous debut of two idol groups, SixTONES and Snow Man, in 2020, what idol group will debut next? This is a hot topic.

A survey of the characteristics and popularity of the 11 current units within Johnny's Jr.
We have also compiled a list of how you can make your debut.

How can Johnny's Jr. debut?

As you all know, in the Johnny's office, there are idols who have debuted on CDs and Johnny's Jr. who are in a trainee-like position before their debut.

There are about 200 members in the Johnny's Jr. group, and several groups exist as "units within Johnny's Jr.

Not all units were able to make their CD debut, and some units graduated from Junior without making their debut.

Johnny's has no clear criteria for debut, nor is there a cycle of debuts every so many years.
Here is a look back at how the last four groups decided to make their debuts.

And it seems that the appeal and Mr. Janie's (the president) crane voice were the deciding factors.
Now that Mr. Janney has passed away, it is unclear how a debut will be decided, but naturally, "popularity, ability, and appeal within the company" are important.

(Internal politics is important, kind of like a businessman...)

Who is close to making their debut? Unit List

Now, how many existing Johnny's Jr. units are there?
These are the 11 units currently announced on ISLAND TV, the official entertainment site of Johnny's Jr.

*The order is as per ISLAND TV.
No dedicated Boys be page at this time.

So, one group at a time, let's take a look at the group overview!

Of the existing units, Travis Japan (commonly known as Traja) has the longest history since its formation.

He is known for his performance skills with the weapon of synchro dancing.

He had a solo lead role in the stage production of "Toraja" and was featured on the cover of the magazine "anan" for the first time, which went into heavy print in 2020.
This is the third time for anan to be in heavy print after SixTONES and Snow Man!

It is rumored to have the ability and popularity to make its debut at any time.

The HiHi Jets are a group of Japanese idols with a great performance that continues the Japanese tradition of roller skating, and a well-developed visual style that gives them a sense of idol royalty.

Although the group is still young, some of the members are musically talented, and their future growth is promising.

A beautiful boy who attracts attention with his impactful name.
The unit is full of beautiful boys who live up to their name, and as they grow older, they become even more handsome.

Many of the members have unique personalities, and individual activities such as dramas and variety shows are increasing.
The balance is also exquisite, and the dialogue between the various characters, including handsome, cute, brilliant, and younger brother characters, is too enjoyable and popular.

The 7 MEN SAMURAI, which has all the requirements of a conventional idol, such as dancing and singing, as well as the dual talents of a band and skateboarding, is the weapon of choice.

Furthermore, the individual members have such strong specialties that they are known as a "traffic jam of specialties," an entertainment group that entertains with their clash of talents.

The Shonen Ninja is the largest unit in the Johnny's since the beginning.
It is a large family that is most enjoyable to watch, with the sense of frolic and chaos that only a large group of people can bring.

They offer a wide range of thrills for all ages, from cute to mature and cool.

They are all-around performers with acrobatics, tap dancing, baton, and other performances, and expectations are high for them to become the next generation of Japanese idols.

To be honest, with "Jr." in the unit name, I was worried that they would continue to be juniors, but as the name "SP" suggests, Jr. SP (Junior Special) is a group of skillful specialists.

The members have mastered singing, dancing, and acrobatics, and yet they also have a relaxed atmosphere in their everyday lives. The gap between the two is also irresistible.

IMPACTors appeared like a comet in 2020.
This unit has a strong character with members who have a strong presence among the junior members.

Naniwa Danshi is very active both as a unit and individually.
Many of the members have been with the company for a long time. Didn't you make your debut? The stability is so outstanding.
結成からまだ4年でこの安定感と人気はすごいですよね。

They are all idols with wonderful faces, and of course, they are equipped with laughter as standard equipment, just like the Kansai Japanese.

He also serves as the image character for Hi-Chew, and his fan base is growing nationwide.

Lil kansai with attractive growth.
The members are all in their teens and close in age, and the friendly flirtation is also a series of cute moments.

Although they are still in the process of developing, they are a unit full of talent and potential, and expectations for them increase year by year.

They have versatile skills in songwriting, band, comedy, and talk, and are produced by Yutaka Yokoyama of Kanjani Eight.

The company continues to gain recognition for its TV exposure as a 24-hour TV personality, a stand-alone show, and even as an individual.

The most recent unit to be formed is Boys be.

Variety show "Maido! The members who have often appeared on "Journey~" will also participate, and finally that girl is in the unit! The new unit has a high level of joy and anticipation.

Yokoyama and Okura of Kanjani Eight are producing the project, and I am looking forward to seeing what kind of unit it will grow into.

Which Johnny's Jr. unit is popular?

So which units are the most popular?I don't want to be bothered by it, but it is a problem that I do care about.

So we have compiled a search volume forecasting tool and the number of posts with hashtags on Instagram. (2021/02/22 results)

*No data on searches for IMPACTors, Jr. SP, and Boys be.

Naniwa boys are very strongYes, sir!
By way of comparison, the number of searches for the debuted Snow Man was 538,400.
I'm not sure how much buzz there is beyond the debutantes.
Expectations are high for their upcoming debut!

Of course, the heat and intensity of the fans cannot be measured here, so it cannot be said to quantify popularity.
We hope that you will see this as just one of many indicators.

The beauty of Johnny's Jr. is that the fans can run with them toward the big goal of their debut.
It's a tough world where not all units and juniors can make their debut, but I hope every unit can be themselves and continue to shine!