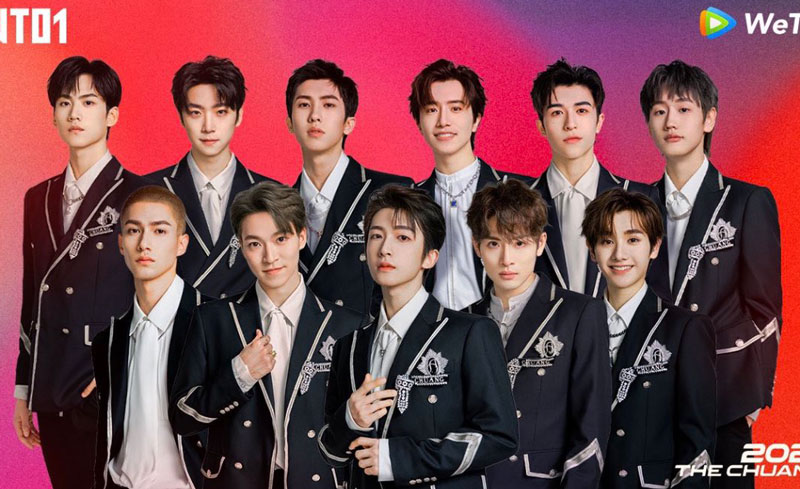 Global boy group INTO1 is set to debut from the audition program "Souzouei 2021"!

Here is a summary of the profiles and attractions of the 11 debutant members, who have been a major topic of conversation since their auditions.

What kind of group is INTO1?

INTO1 is a global boy group that was created through the Chinese audition program "SOUZOUEI 2021".

The group name and members were announced on April 25, 2021, at the last session of the creation and management.
INTO1 is a time-limited group, active for two years.
It's sad that we know we're breaking up, but knowing what we know someday, we'll support you all with no regrets!

What is creation and management?

It is the Chinese version of the Korean audition program "PRODUCE101", also known as Chinese Pudu, Pudu China, or Zhongpu.

In the PRODUCE101 series, the top 11 debut members are determined by popular vote by the general viewing public.

The program was global in scope from the time of broadcast, with practitioners from all over the world and viewing available via the web and apps.

*By the way, in China Pudu, they are called "scholars" instead of practitioners.

While Japan's PRODUCE101 (commonly known as Nippu) has a strong element of discovering gemstones, with inexperienced ordinary people participating, China's Pudu was attended by trainees from entertainment agencies and professionals already engaged in entertainment activities.

Why don't we just go ahead and debut them all?

The performance was at such a high level that it became a topic of conversation from the first broadcast.

INTO1 Members and Nationalities

INTO1 is a multinational group consisting of members from China, Japan, Thailand and other countries.

Now, here are the profiles of the members in the order of their final ranking in SOUZOUEI 2021!

Clean, beautiful, quality
It has a noble atmosphere and a sense of transparency that fits this word.

He looks crazy in old Chinese clothes and has even been in a TV drama.

Liu Yu has the suppleness and grace of a ballet dancer, and the neutral charm of a somewhat Takarazuka-like figure.

Liu Yu seems perfect, but he has low self-esteem.

I'm not tall, and my face is not that good looking. I'm not perfect, so I try to be perfect every day."

I was always on edge to be perfect.
However, at some point, he changed his mind to see more of his inner self and began to show a more relaxed expression.

Santa is a member of the Japanese-Chinese mixed group "WARPs," which belongs to avex.

He is a top dancer who has won numerous world competitions many times and has performed as a guest dancer in SHINee Taemin's Japan tour.

You're not at the level of participating in an audition show now!
He has a history of being a total audience favorite.

Such a performance by Santa-kun is, of course, beyond reproach.

After this performance, Santa, who had been sick to begin with, collapsed on the stage.
This level of performance was cultivated because of the high level of professionalism everywhere.

In Souzouei, there were differences in awareness and level of communication with other practitioners, as well as language barriers that prevented good communication.

However, through this audition, I learned not only how to dance to win the contest, but also how to have fun, and my face became softer.
Through his connections with others, Santa's range of expression has expanded, hasn't it?

Like Santa, Rikimaru is a member of the Japanese-Chinese mixed group WARPs.

Rikimaru-kun is such a famous dancer that he has choreographed for famous K-POP artists such as SHINee and Red Velvet.

That is why her dancing ability is so well known.

That is not the only thing that makes Rikimaru-kun amazing.
In addition to being fluent in Japanese, English, and Portuguese, my Chinese has improved dramatically through this Chinese Pudu.

(By the way, Santa's progress in Chinese has been amazing!)

On stage, Rikimaru is a sharp dancer with a powerful singing voice, but his personality is...natural.

Rikimaru-kun's calm manner of speaking is also popular for being cute.

Mika is a member of INTERSECTION, a four-member half-Japanese-American group.

INTERSECTION is an avex artist and debuted with "Heart of Gold" in October 2018.

Intersection's music has all the talent of the second coming of ONE DIRECTION!

INTERSECTION is more of a vocal group or band than an idol group.
I had never trained as an idol, so I had little experience with dancing.

He had been active in Japan for six years, but was considering a change of direction after failing to make a big hit.
In Souzouei, which he hoped would be his "last challenge on the path of music," his overwhelming ability and visuals were discovered.

Micah's voice is gentle and has the groove of a foreign artist, as his first language is English.

Mika's popularity is not only due to his voice and singing ability.

His comments were always humble, with a shy, bashful smile.
He looks like a good basketball player, but he is surprisingly bad at it.
Such a cute aspect is also loved.

Nine is a kind, bright and lovely boy from Thailand.
He also appeared in dramas as a young actor in Thailand.

However, Nine-kun wanted to be an idol.
To seize the opportunity, he went to China because there were no companies in Thailand that trained idols.
In three short months, she sang, danced, and learned to speak fluent Chinese.

In contrast to her usual cute, angelic appearance, she sings in a bewitching, moody voice on stage.

Lin Mo was a popular trainee from the beginning, having previously been in the same group as LoLo, a member of "R1SE" who debuted from "Souzouei 2019".

Living up to his reputation, he is a talented all-rounder who can sing and dance.
From cute, cool, serious, sexy, and various other concepts are performed beautifully on each stage.

Rinmo's personality is caring, positive, and mischievous.
His background as a trainee in an office from the age of 12 has strengthened his spirit to take a positive approach to everything.

The humanistic character, who is also known as a gourd and in charge of comedy, is also hard to take your eyes off of.

Bo Yan (Bo Yuen), the oldest student at INTO1.
He is a responsible and caring big brother to all.

Bo Yang, who was a vocal instructor before Souzouei 2021, has a considerable level of singing ability.

And Boyan, what a fan of LDH!
Perhaps because of this, she also sings well in Japanese.
INTO1 will be a force to be reckoned with in the Japanese market.

It is strange that not much fuss has been made about it, but Boyan has a very high level of visual appeal, and his enigmatic coolness, somewhat like that of GACKT, is also noteworthy.

Jah Yuen has previously appeared in an audition to discover a band, and his image as a guitar player is quite strong, and he also plays guitar in Souzouei 2021.

Jayuen is a mood maker who enlivens the atmosphere with his interesting character.

The episode in which he started growing his own leeks because he wanted to eat leeks is no longer funny but surreal?

Patrick, a beautiful boy from Thailand.
Like Naing, he was active as an actor, appearing in TV dramas in Thailand, but came to China to become an idol.

The duo's performance with Nain was so well matched that the public was impressed with their performance, saying that they were like the band Tohoshinki.

I am so happy that these two debuted together.

Patrick, who has many YouTube views and is popular overseas, is known for his honest personality and sincere praise.

With a face like an actor and a model-like figure of 188cm, Mr. Jou Kouyuu is a model with a great style.

Despite his age of 20, he has a calm and relaxed personality.
Glasses look great on her and have been driving girls who like glasses crazy.

The best is the one with glass cord.

He is an all-rounder who can dance, vocalize, and even rap, and is an honor student who also speaks English.

Zhou Ke Yu is intelligent, cool, and approachable, but his conversations with his peers reveal a warmth and compassion for others.

Mr. Liu Chang, a.k.a. AK, has outstanding skills and is considered the No. 1 rap artist in the world.

AK-kun's rap skills are so good that even if you are not familiar with rap music, you will be able to tell that this is from someone who is very good at it!

AK-kun studied in Japan for half a year as an exchange student when he was in junior high school, and he speaks Japanese.
The way he speaks is a bit bubbly and cute, and his popularity in Japan is exploding.

Here is the Japanese summary of the second episode of everyone's favorite Liu Akira 🥺The way he says "yaba-i" is so cute!# Liu Chang #LiuZhang #创造营2021 #Chuang2021 pic.twitter.com/Y6uc6FM3Aq

INTO1 members in order of age

INTO1 members have quite a wide age range, with Bo-Yuen the oldest and Patrick the youngest.11 years difference!

The age range of fans is likely to be broad.

INTO1 members in order of height

All INTOE1 members are over 170cm tall, with an average height of 178cm.

The 17cm height difference between Kuyu-kun and Rikimaru-kun is also precious.