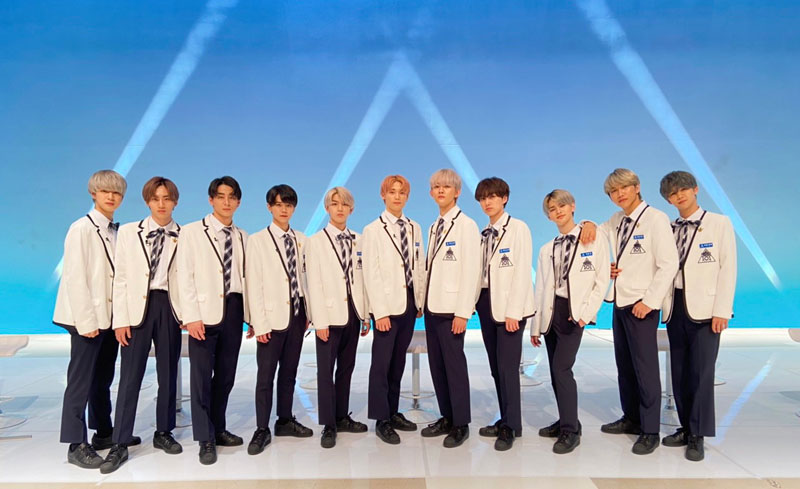 The global boy group "INI" (INI) is attracting attention.
What kind of group is INI this time?
Here is a summary of the members' profiles, personalities, heights, popularity order, ages, and more!

What kind of group is INI?

Pudu was originally a hit audition show in Korea.
INI was born, its Japanese version.

INI is the birth of a rival group to JO1, which has become a nationally popular group! It is also attracting a great deal of attention as a

and there is an element of 1 or I in there somewhere.
INI also feels like a group that's carrying on the spirit of the Pudu brand!

Log in with us!
I guess that means that we should be connected.

This pose was invented by Tajima, a member of the group.
You are making an N shape with your hands.

There is also a pattern that can be completed by two people.

When is INI's debut date? What is your debut song?

The INI debut song is "Rocketeer".

The music is very oratorical and gory, with a lot of rapping and dancing, and a strong K-pop element.
INI too cool ！！！！！

Rapone is a merger company of Korean giant CJ ENM and Yoshimoto Kogyo.
The first artist to belong to the group is JO1, also from PRODUCE101 JAPAN.
INI is the second group of Laponais.

This may sound like Yoshimoto is involved, but as a company, it is independent and is a separate company from the comedy company Yoshimoto.

Although it's a separate company from Yoshimoto, it's taking over the expertise of a major company, and we can expect great things from INI in the years to come!

What is the name of INI's fan club and what is the origin of its meaning?

The name of INI's fan club is MINI.

They are adorable!
They were chosen by INI members from among candidates submitted by fan clubs.

There are 11 INI members here.
Here are the profiles, one by one, in the order of their final ranking in Nippu 2!

Masaya Kimura was known from season 1 as a dance partner of Ren Kawajiri of JO1.

Prior to Pudu, he was a back-up dancer, choreographer, and dance teacher for many famous artists, including Sebuchi.

He is popular not only for his dancing ability but also for his cute and handsome sweet mask.

The mind part of him is also very attentive to his surroundings and always smiling and kind.
He has the qualities to be a soft and cohesive leader, and is recognized as a man of character.

Naturally, Masaya Kimura was chosen as the leader of INI due to his overwhelming support from the members!

Experienced and caring, Masaya Kimura is the perfect leader.

A trainee, Daimu Takatsuka, has been attracting attention for his vocal skills.

A great voice with great extension, an outstanding volume, a high pitched voice that gives the crowd goosebumps!!!
The group battle, "AGEHA," was a sight to behold!

I was worried about the level of her dancing since she started with no experience, but she has improved her facial expression and charm with continuous practice, and she has already grown up to show us her overwhelming presence on stage with full of confidence!

Shogo Tajima is a former Johnny's Jr. and a former trainee at a Korean agency, so he has a lot of experience as an idol.
An all-rounder who can sing, dance and rap.
Especially noteworthy is the good sense of rhythm in dance and the sharpness supported by muscular strength.

I really admire your kindness and soft and fluffy atmosphere of caring for others in spite of your tough past.

They were quite popular in their junior years, and many fans still support them.
INI was a long-awaited debut for fans and for Shogo Tajima!

His singing ability is one of the best or second best in the INI.
The singing is amazing, just amazing.
Could he debut as a solo singer? I think they are so good.

The song "Melody instead of a bouquet" performed in the position battle ranked No. 1 on YouTube and has received more than 4.2 million views.
It is impressive no matter how many times I see it.

Kyosuke Fujimaki joined Pudu to become a singer, which had been his dream since he was a child.

I had no previous experience in dance, but I have grown so much in Pudu through friendly competition with the other high level trainees!
A singing voice that won't blink even when dancing at full speed, she's supposed to be the face of the group!

Takumi Ozaki has been performing on the street and in groups since high school.

The vocal prowess that he has developed through this undergoing experience is outstanding.
His dancing and rapping have also improved dramatically in Pudu, and he is now a trusted all-rounder.

Her well-defined visual appeal is also very popular, and her dimpled smile is a charm.
She's just as cute when she's dressed as a woman as she is when she's not!
She has a lovely personality and is a teasing character.

Nishi Kojin has experience as a back-up dancer for SHINee Taemin's tour.
He has also backed Daichi Miura on the Kohaku stage.

The powerful and dynamic dance, the unique expression that only Kohjin Nishi can give, the
And the unique aura and atmosphere is also attracting attention.

While she has dance ability that everyone is convinced of, she also has the dedication to work on rapping and vocals to raise her level, humbly admitting that dancing is the only thing she can do.
Through such efforts, the members have exploded with abilities other than dancing.

Coming from Okinawa, the INI sun!
It is also known by the nickname MJ.

Matsuda Xun has an overwhelming presence on stage, a sense of emperor, and a sense of dominating the scene.
Your beautiful, yet unique, face is so artistic!

He has a cheerful personality that takes the initiative to enliven the atmosphere while others are performing.

Xu Fengben, who used to be a trainee in China.
They have the blessed qualities of K-pop atmosphere and body lines, and are an eye-catcher on stage.

He is capable of intense dancing with gusto and can also produce high vocal keys.

He speaks four languages (Japanese, Chinese, Korean, and English) and will likely lead the group as a global artist once he joins the debut members.

I even ran out of the practice room in frustration because I couldn't perform well.
Even practice is just as serious as the real thing.
I'm sure Xu Fengben-kun, who is very strict with himself, will continue to evolve!

Rito Ikezaki has a cool rap with a low voice.
An anime theme song he heard in elementary school got him into rapping, and he even writes his own lyrics.

His quick thinking, gag sense, and punchy comments will make him a reassuring member of INI, who is sure to be a great variety player in the future.

His masculine visuals with a deep moat, said to resemble SHINee's Taemin-kun, are also attracting attention.

When he first joined Pudu, Yudai Sano had absolutely no dance experience.
Despite this, it has won the hearts of national producers with its cute charm from the beginning.

It was impressive to see how fast they grew, struggling with the gap between themselves and other experienced practitioners, and how fast they improved through desperate practice.
We are also looking forward to the growth potential that is still growing.

The cute, maternal-like atmosphere and the visual resemblance to BTS's Jin-kun are also popular points.
Her cute girlish reactions and the graceful way she covers her mouth with her hand when she laughs are also noteworthy.

With his sweet visuals, Weisong Goto stands out among the fashionable and practicing students.
He once won the Grand Prix at Mr. Kong when he was a sophomore in college.

Above all, it's spectacular!
The face with squinting eyes due to poor eyesight, and the glasses are also moe.

Droopy-eyed and soft-spoken, humble and carefully worded, straightforward and dedicated.
We can't take our eyes off the unexpectedness of his enthusiasm during practice and his cool expression on stage, though he has nothing but the elements to be loved by the public.

INI members in order of height

INI members sorted by height!
The average height of INI is 174 cm.

INI members in order of age

INI members sorted by age!
The ages below are always updated to the latest.

The oldest is Nishi and the manneh is Matsuda!

The Nippu 2 final ranking is shown in the image above, but some have pointed out that the program's voting may not be in pure popularity order due to bailout votes and other factors.

There are various indicators to measure popularity, but here we have ranked the number of hashtagged posts on Instagram as follows.

INI is such a group!