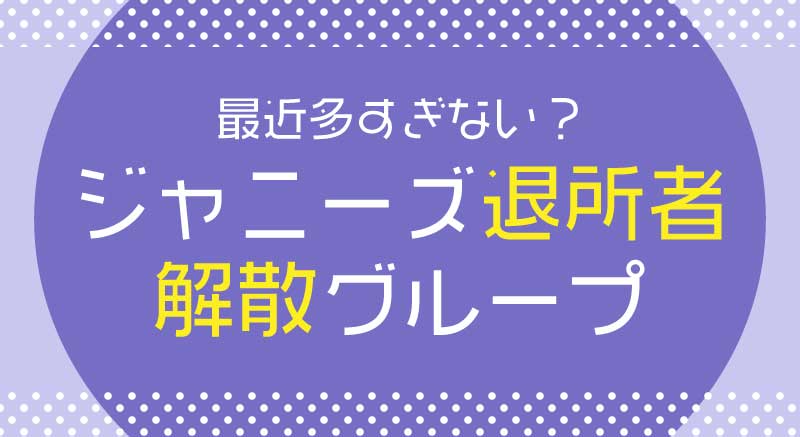 The V6 was announced to be breaking up, and even the V6 who were thought to be safe and sound! The tea house is in a state of shock.

In the past few years, Japanese talents have been leaving and groups have been disbanding. Which group is next? Many people are concerned.

This section summarizes idols belonging to Johnny's who have disbanded or left the group in recent years, including the number of years the remaining groups have been active and the reasons for the rush to leave the group.

Talk about too many Japanese exits & breakups.

Recently, there has been a lot of talk about the continuing exits of talents from the Johnny's Office and the breakup of groups.

Will that trend lead to my guesses being withdrawn or broken up this time? Many people are anxious about this.

Wait, wait, wait.
I think the Japanese people have quit too much in the last few years.
With the exit, dissolution, and suspension of
Too much panic 😭😭😭
It's too sudden for me, but 、、、、、

I'm not surprised anymore because there have been so many breakups and departures from Johnny's.

I've been watching "Let's go to school" and other shows... 💦There have been so many departures and breakups of Johnny's groups in recent years that I'm worried that it might extend to KinKi... 😓There are rumors about Tsuyoshi's departure as well... My heart is in turmoil 😢.

There have been so many breakups, departures, and suspensions of Johnny's lately that I'm afraid that one day that will happen to Kiss My, too.

There have been so many breakups, departures, and suspensions of the Johnny's that I'm crying that I really don't have any peace of mind no matter which area or group I'm following...

Indeed, with so many breakups and exits, which group is next? I'm sure you're worried about that!

Let's begin here with a review of the recent breakups and exits of Japanese groups.

The 2016 SMAP breakup is said to have sparked a rush of Japanese exits and breakups.

Let's take a look back at the process of leaving and disbanding of the Japanese after SMAP.

There have certainly been a lot of exits and breakups in the last few years!

Especially in 2020, the media was abuzz every day with the news of Arashi's suspension, and the rush of big-name artists leaving the industry.

Which Johnny's group will break up next...?

With so many breakups & exits, which group is next? I am worried about that, aren't you?

It is not something we like to think about too much, and who knows when it will happen.
However, it is a path that will eventually pass.

The following is a summary of how many years have passed since the debut of the currently active Johnny's group.
*Activity history is the number of years since debut, excluding the Jr. period.

Most groups are 10 year players!
As for KinKi Kids, it has been more than 20 years since their debut, and they are now a big name.

No wonder this is a cause for concern about inactivity.
I'd rather say thank you for being active for so long!

Why? Why are there so many breakups & exits of Janes?

In the first place, why have so many Japanese companies disbanded or left the market recently?
You may be wondering why.

For one thing, the centripetal force of the office, which is no longer spoken of as a matter of course, has weakened.
President Janie Kitagawa, the nurturing father of the Japanese talents, passed away in July 2019.

It is said that although many of the talents were thinking about their future activities, not as idols, many of the veterans stayed on as long as Mr. Janney was around.

And timing.
Johnny's has long been derided for its aging population, with many veteran idol groups.

SMAP, TOKIO, Arashi, and V6 have been at the forefront for over 20 years.
It is not surprising that during those 20 years of long activity, the desire to develop a new career and produce younger idols would emerge.

The timing for this generational shift has just now collectively arrived.

It is sad to see a group or idol that you have supported for a long time disband.

However, leaving or disbanding is not always for backward-looking reasons.
We may continue to see more breakups and exits from the Japanese, but I'll support them in whatever way I can as they make the positive decision to move on to the next stage of their lives!